In the early days of flight, Glenn Curtiss was the primary American competitor to the Wrights. A major difference between the Wright and Curtiss products was pilots controlled the planes. Curtiss' Model D airplane was controlled with ailerons, small hinged control surfaces mounted between the wings, rather than wing warping, which deformed the entire wing and was protected by the Wright Brothers' patent. Curtiss also used a different control system than the Wrights. While the Wrights used a series of levers, Curtiss used a wheel to operate the front elevator and rear rudder and operated the ailerons with a shoulder yoke. This meant that when a pilot wanted to turn, he or she simply leaned in the desired direction, just like riding a bicycle or motorcycle. 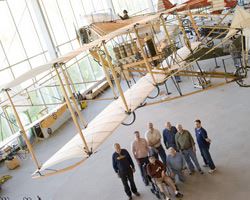 When the U.S. Army purchased a Pusher in March 1911, it was designated as S.C. No. 2 because it was the second plane owned by the Signal Corp Division. S.C. no one was a Wright Military Flyer. The plane was originally sent to the flying school at Fort Sam Houston, Texas. Following the fatal crash of Lieutenant George Kelly in May 1911, S.C. No. 2 was rebuilt and shipped to the aviation school at College Park. It arrived with an 8-cylinder engine, but mechanics installed a less powerful 4-cylinder engine to make it safer to train new pilots. The College Park pilots who received instruction on how to fly this aircraft included Captain Paul Beck, 2nd Lieutenant Frank M. Kennedy, and Captain Frederick B. Hennessy.